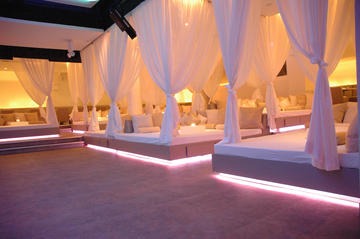 Until recently, my last memory of eating in bed entailed my mother unearthing the gummy worms I had slipped in my mouth at bedtime—“A big no-no!” I was promptly warned. So when I heard about Duvet, New York City’s new bed-ridden restaurant, I was immediately intrigued—sorry mom.

“Space-age boudoir” could best describe Duvet’s otherworldly atmosphere, where the glowing glass cocktail bar unfolds like a lunar landscape and lights blaze above like multicolored stars. Even the jellyfish look extraterrestrial as they eerily stew about their aquarium. But perhaps the restaurant’s most alien feature is its collection of 30 king-size beds, all outfitted in champagne-colored sheets and butter-soft satin pillows.

Upon my arrival at Duvet, I was ordered to ditch my heels for a pair of complimentary, white terry slippers. I’ll admit that my feet aren’t petite, but I was troubled when my toes dangled off the end of each slipper like hotdogs on an ill-fitting bun. Next, I was whisked to my bed and told to make myself “comfortable”—something I avoided by tying my long legs into a pretzel. I nervously glanced at other beds nearby, feeling as though I looking into the world’s largest peephole. There was only one problem: I was being watched, too.

But by my third white satin mojito, I began to loosen up. Duvet’s menu is both original and accessible, and I had no trouble calming my nerves with bites of charred mackerel garnished with pineapple and peppercorns, and silky bluefin tuna sashimi surrounded by luminous tangerines, pickled peppers, and crisp radish—that is, until the bed-sheet popped off the mattress.

“That never happens!” assured my shamefaced waiter, who unfortunately had to repeat himself 10 minutes later.

After extinguishing my candle by knocking over my water glass, I escaped to the unisex loo to regroup. My plan was foiled, however, when I discovered that the bathroom stall doors were one-way-glass mirrors. So while I did my “business,” I was entertained by others applying their lipstick and picking their teeth in my direction.

Back in bed, between tangy bites of tangerine crème brûlée and black pepper churro (a skinny, fried pastry), I began to wonder whether my mother had been onto something. Was eating in bed “A big no-no?” Perhaps only if you’re being watched.