In Thailand: Dodging Death for Eggplant at Mae Klong Market 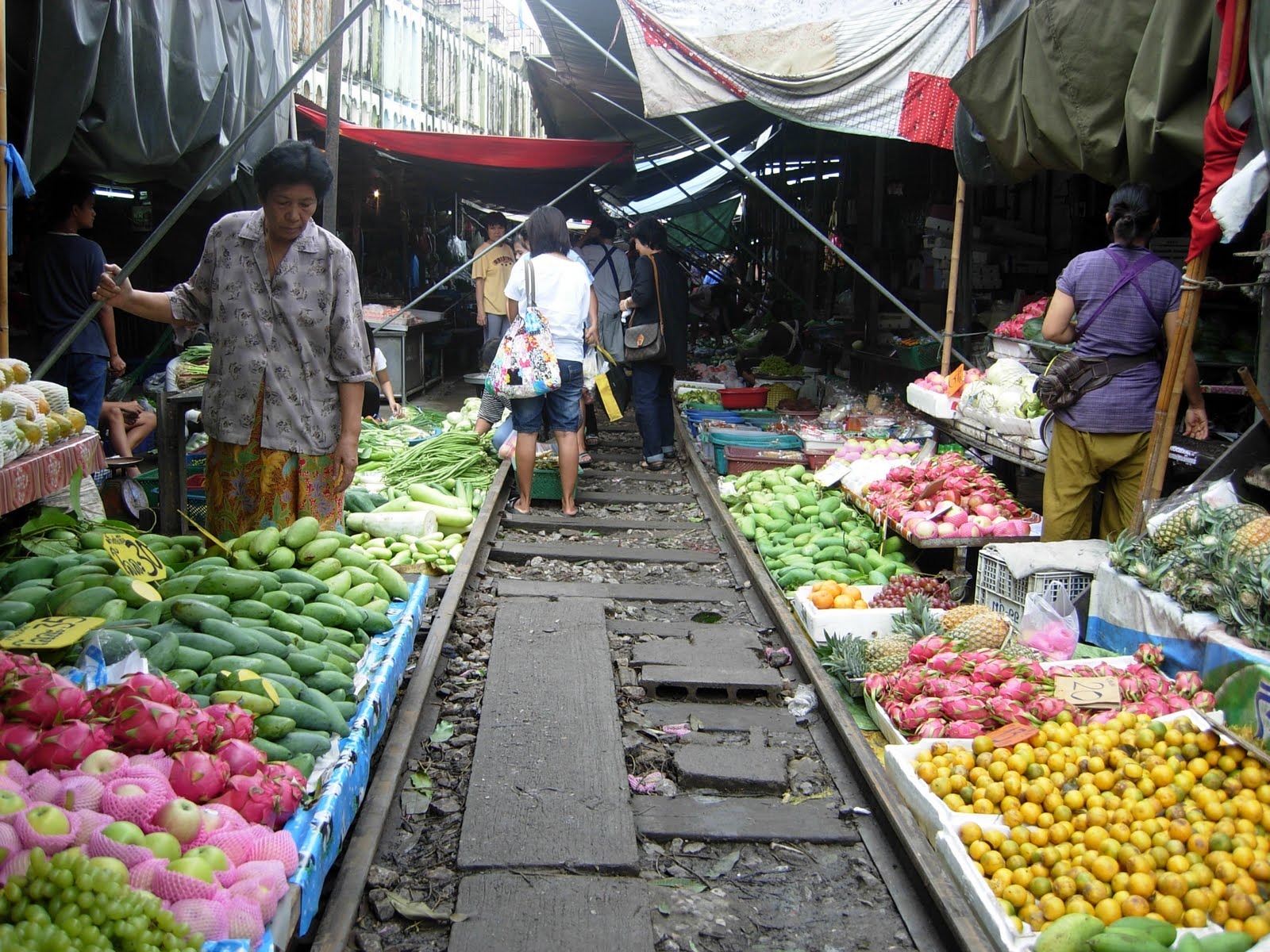 Resting silently beneath the crowd like a slumbering serpent, a single train track winds its way through the heart of Mae Klong food market in Thailand’s small province of Samut Songkhram. Flanked heavily by bushels of crisp winged beans, water spinach, bulbous knobs of jack fruit, and palettes of artfully-arranged fish gawking in unison, the narrow track serves not only as a place for vendors to display their wares, but also as the market’s main walkway. Until, that is, until the train makes an appearance.

Today, I am at Mae Klong market, not only feast my eyes on Thailand’s edible bounty, but also observe a phenomenon that some viewers on YouTube have deemed “impossible,” “a hoax,” or “genius video manipulation.” I follow the train track deep into the crowd, where hordes of hurried shoppers choreograph an impromptu dance of lively bargaining, shuffling shopping bags, and the occasional stumbling over a stray cat.

I watch baby eels squirm in a blue plastic bucket. I observe that frogs-on-a-stick are a popular lunch item. I photograph a mountain range of curry pastes as red as the Sedona desert.

Suddenly, my tour guide grabs my arm and parks me one foot from the train track. “Stay here,” he instructs, his black eyes gleaming like obsidian. I am about to witness something extraordinary.

As I struggle to see further down the congested track, I detect the faint wheeze of a train whistle in the distance. “Rót fai!” a woman urgently calls out. "Train!" A frenzied electricity fills the air as vendors hastily pull their wares away from the track. (Apparently, it is a mere eight inches to the safety zone.) Then, in a Murphy bed-like fashion, the overhead awnings fold upward and back, and my face is instantly flooded with sunlight. The train whistle grows louder. Within a mere 60 seconds, the track has become a no man’s land, a blank canvas of bolts and steel that disappears into the distance. A tourist lingers between the rails and is swiftly scolded by a man hauling his eggplants to safety.

The safety zone beside the track is now at full capacity, and I find myself squished between two giggly girls in matching school uniforms on one side and a huge tub of shrimp on the other. The ground begins to vibrate. Suddenly, a bright yellow train car bursts into view and I suck in my gut thinking that the extra inch of space I create might save my life. I watch with a combination of amazement and horror as the train glides right in front of our toes and noses. And then, it is gone.

In a fury of organized chaos, the vendors quickly push their wares back towards the track, the awnings unfold, the track floods with people, and barely a minute later, it is business as usual.

Operated by the State Railway of Thailand, the Mae Klong Railway stretches from Bangkok’s little-known Wong Wian Yai station to Samut Songkhram (approximately 45 miles to the southwest). Prior to the construction of the railway in 1904, locals regularly gathered in Mae Klong to sell fresh produce and seafood. When plans for the new railway revealed that the train would drive straight through their gathering place, a lack of available space convinced the locals to stay put, and no law could force them to move.

Today, the train continues to run through Mae Klong food market up to eight times a day, seven days a week, and the locals don’t seem to mind. Many stay because of the inexpensive rent. Those wishing to ride the train from Bangkok can do so, but should be advised that the train track disappears abruptly at the Tha Chin river in Samut Sakhon (Mahachai), so you must exit the train and travel by ferry to the other side of the river (Ban Laem). There, you can catch your connecting train to Samut Songkhram (Mae Klong market).

If time or effort is a concern, Mae Klong market can also be reached by car or bus (the Damnoen Saduak line from Bangkok’s southern bus terminal). For more information, visit the Tourism Authority of Thailand’s website at www.tourismthailand.org.