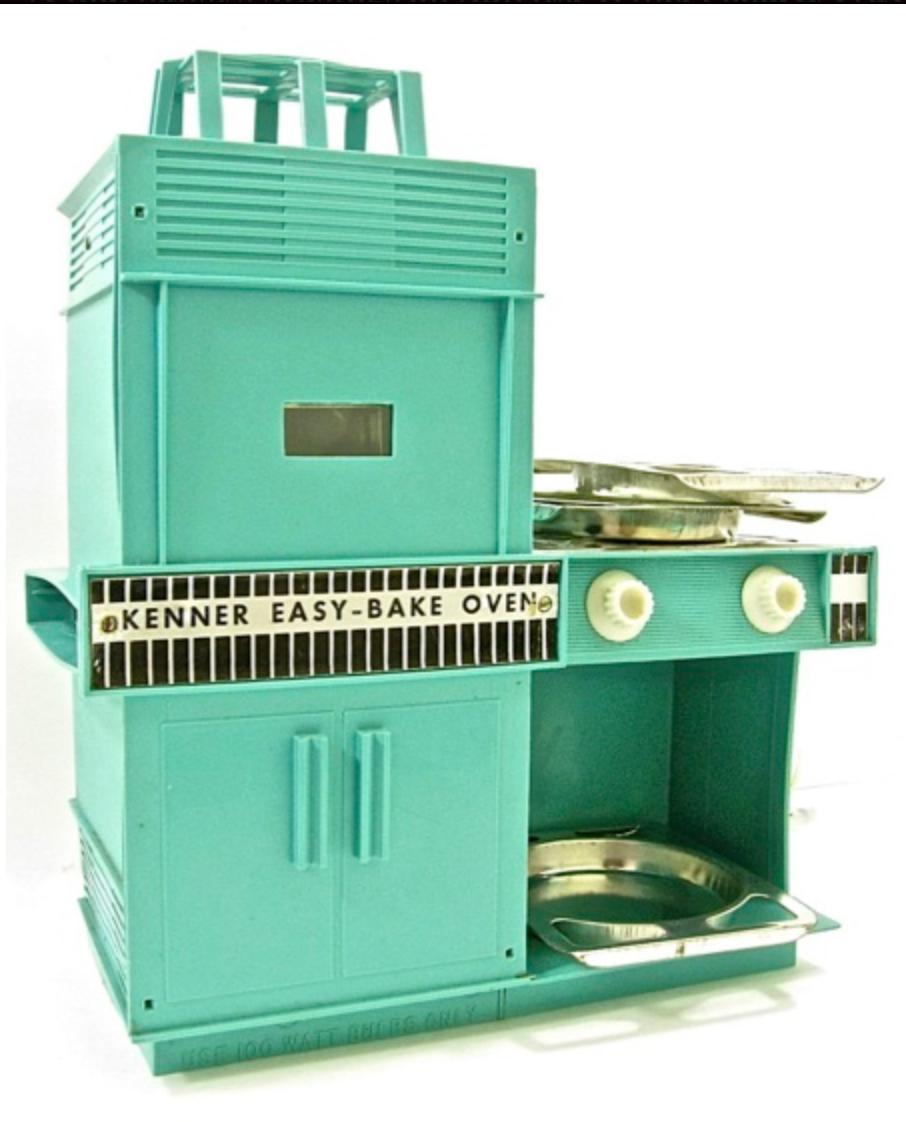 All I ever wanted was an Easy-Bake Oven. As an eight-year-old, I was convinced it would cure the most monstrous malady in the world: boredom. At least according to the little red-haired girl on TV. She looked positively tickled to be in the company of such a miraculous contraption.

The very moment the commercial would appear, I would bolt towards the television; my hair would cling electrically to the screen as my eyes rested six inches from the glass.

“Mooom!” I would urgently yelp. “This is the machine I want! Come look—Quick!”

But every time the commercial came on, Mom would have her head neatly tucked in our own oven, either inspecting a pot roast or poking potatoes. Alas, it seemed I was destined to bake invisible snickerdoodles until I was “an adult”—whatever that was.

Introduced by Kenner in 1963, the Easy-Bake Oven instantly appealed to pint-size aspiring bakers. Who needed mud pies or Play-Doh hotdogs when one could bake a real brownie? All it took was some simple mixing and the warm glow of a 60 watt bulb to create an edible goldmine. One could even watch their creation incubate inside the heating chamber, thanks to the oven’s nifty viewing window.

As technology and design modernized over the next three decades, the oven followed suit. Additional products were added to the line, including the Easy-Pop Corn Popper, a bubble gum set, potato chip maker, and taffy machine. Individually-sold mixes also became available. During the 1970s, the oven turned a zesty shade of avocado green and saw the addition of a working timer and temperature gauge. And in the 1980s, with a nod to the microwave, Kenner developed the Easy-Bake Mini-Wave Oven.

I recently made a trip to a local toy store to check out the current model. Now called the Easy-Bake Oven and Snack Center, it features a warming tray to melt various toppings, like cheese or marshmallow cream. In addition, Easy-Bake now offers brand-name mixes, like OREOs and Pop Tarts. And yes, it’s still powered by a light bulb.

I stood alone in the aisle and looked longingly at the gleaming ovens. After wondering what my husband would think if I showed up at the apartment with a bubblegum pink oven under my arm, I quickly fled the store. Besides, a batch of freshly-made snickerdoodles awaited at home.