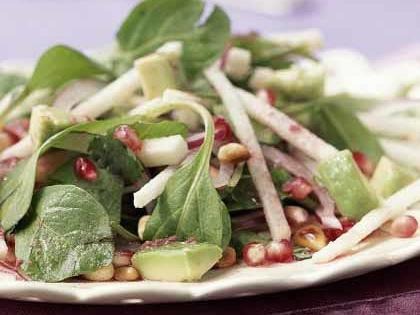 In a classic Aesop fable, the pomegranate argues with the apple as to whom is more beautiful. If this were a dispute over who contains more cancer-fighting antioxidants—specifically poyphenols—the pomegranate would win, hands down. Known for giving red wine and green tea their healthful reputation, polyphenols have recently granted the pomegranate a career boost. Step aside Cabernet. Just one glass of pomegranate juice contains the same polyphenol content as two glasses of red wine, four glasses of cranberry juice, six cups of authentic hot chocolate, or ten cups of green tea. It’s is also an excellent source of vitamin C, potassium, and calcium.

As one of the oldest cultivated fruits in history, the pomegranate is no stranger to fables and folklore. Throughout history, this 6000 year-old fruit has been considered a symbol of immortality, fertility, and abundance. In Greek mythology, the love goddess Aphrodite was thought to have planted the first pomegranate, likely initiating the fruit’s reputation as an aphrodisiac. King Tutankhamen was entombed with pomegranates in the hope that they would lead to his rebirth. And some believe that it was a pomegranate—not an apple—that tempted Adam and Eve in the Garden of Eden.

Today, the pomegranate continues to woo us—and not just for its luscious taste. Scientists are being drawn to its antioxidant-rich properties as studies suggest the fruit’s potential role in preventing cancer and dementia, reducing the risk of cardiovascular disease, and lowering both LDL cholesterol and blood pressure.

When choosing a pomegranate, look for those that are round, plump, and blemish-free. The bigger the fruit, the better, too, as they tend to be the juiciest. If you’re worried about scarlet-stained fingers—fear not. It’s easy to keep your hands (and clothes, and walls) stain-free by dissecting the fruit in a large bowl of water (see Red Alert below). While fresh pomegranates are available only from September to January, the delicious, nutrient-rich juice is obtainable year-round. Brands like Lakewood Organic, POM Wonderful, and Knudsen, can be found in most major supermarkets and natural food stores. For a perfectly piquant treat, seek out pomegranate molasses. A traditional ingredient in Middle Eastern cuisine, the thick, sweet and tart syrup is a vibrantly flavorful addition to dressings, glazes, and marinades.

Original recipes written and developed for this article

Red Alert: Pomegranates will stain anything in their path—but don’t change your name to Scarlet O’Hara just yet: A bowl of water is the only tool you need to keep you (and your kitchen) stain-free.

2. Under the water, use a medium-size knife to carefully slice off the crown and opposite end of the pomegranate so that the seeds are just visible, then score the pomegranate lengthwise into 1 1/2”-wide wedges.

3. With your thumbs, carefully pry the pomegranate apart beneath the water and turn each section inside out. Begin to separate the seeds from the inner white membrane, taking care not to burst the individual juice sacs. The membrane will float on top of the water while the seeds sink to the bottom of the bowl.

4. With a large slotted spoon, skim off the floating membrane. Sort through the seeds beneath the water, discarding any stray pieces of membrane (it’s unpleasantly bitter).

5. Drain the pomegranate seeds in a fine mesh strainer. Use immediately or refrigerate for up to one week.