The Spirit of Scotland 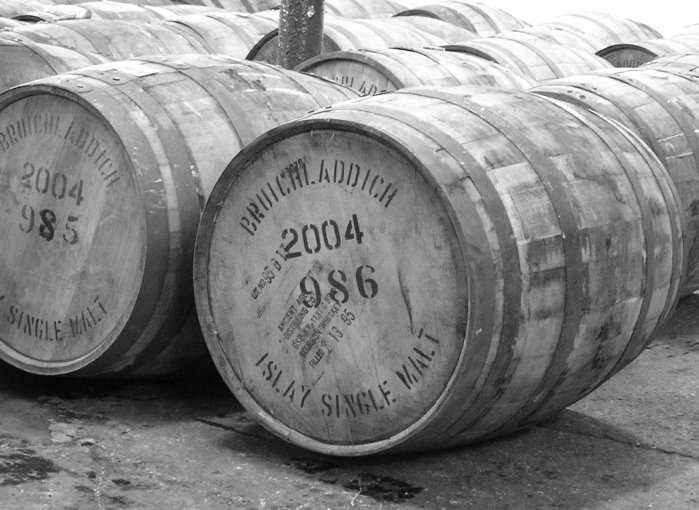 If the Scotch whisky industry were a man, I would be in love. Surely he would be the “sensitive-type”—unashamed to show his emotions, honest, loyal, respectful, and kind. Public Displays of Affection would be perfectly acceptable; and I would always feel protected.

My first rendezvous with SWI (as I like to call him) occurred during a recent trip to Scotland, during which I had planned to pilfer a taste not only of the Scottish countryside, but also the native drink: Scotch whisky. The date took place at historic The Dalmore, a distillery snuggled amongst the grey-flannelled Scottish Highlands. And when we were introduced, via Mr. Richard Paterson, award-winning Master Scotch Blender for Whyte and Mackay Distillers, I was instantly smitten—and not just for Paterson’s matching pink tie and kerchief. Paterson was giving a master class on “the proper way to drink Scotch,”—a process, I soon learned, that begins with a gracious salutation to the Scotch itself.

“Helloooo. How aaarrre yoooou?” Paterson had called out to his dram. The hope was that the Scotch would respond with the lilting aroma of Scotland itself: Warmth, passion, sweetness, and spice—scents that not only describe the nuances of Scotch whisky, but also the people who make the whisky industry function like a well-oiled Pot Still.

Paterson had spent the first half hour of class expertly getting our attention. This included slinging drams of Scotch over his shoulder, detonating confetti poppers, and relaying the precise details of Abraham Lincoln’s assassination…and Scotland’s square mileage…and its annual rainfall…and the nautical length of each coast—“Did you get all that?” he had quipped.

When we arrived at the tasting portion of the class, Paterson poured himself a dram of “new-make spirit” (un-aged whisky), then grandly swirled the Scotch around his glass to “arouse its scent.”

“The only way to make sure your Scotch is up to standard, is to smell it,” Paterson announced, dipping his nose into the dram’s pear-shaped body. “When I say ‘Hello’ to this whisky, it replies, ‘Hello, I’m 68% alcohol.’ So I disregard that.” Paterson double-dipped for another whiff. “Then I ask, ‘How are you?’ The whisky replies, ‘Well, I’m in a bad mood. I’m hot. I’m grumpy. I’m really rather angry.’” I began to speculate how much whisky a Master Blender must sample each day.

“What the whisky is telling you,” Paterson revealed, “is that it needs to go…To Sleep. It needs to sleep for 10, 15, 20 years—we’re looking for perfection.” He exchanged the Scotch for a sample of The Dalmore’s 12-year-old single Highland malt, took a swig, then invited the whisky to “simply relax” in his mouth, “allowing the warmth of [his] tongue release the Scotch’s flavor.”

“Mmm. Mm Hmm. Mm Hmm. Mmm. Mmmm…” he contemplated, one finger twirling in front of his closed mouth like a plane’s propeller. Nearly a minute passed as we waited for the diagnosis. “Ahhh! Beautiful citrus. A lot of orange peel, spice, and a bit of marzipan lingering at the back. This is what you’re looking for—for the true passion of the Scotch to come through.”

If Paterson’s exuberance for Scotch whisky leaves your palate skeptical, it’s probably because Scotch either:

A.) Reminds you how much you drank in college
B.) Is “a manly man’s drink” (to quote my mother)
C.) Tastes bad

For those who chose C., perhaps it’s time to contemplate changing your answer to D.) None of the above. Before setting out on my Scotch whisky crusade, I wasn’t convinced I liked Scotch, either. Frankly, the thought of spending 10 days dousing my uninitiated liver with “a manly man’s drink” was a bit unnerving. (‘Would a pink dress be considered too girly for Scotch drinking?’ for example.) But once I discovered that thousands of Scots had fought to their death for the stuff, I decided to give it a shot—er, uh—a dram.

“One of the biggest mistakes that people make when trying Scotch for the first time, is to drink it neat,” laments Jonathan Driver, Malt Whisky Director for Diageo Distillers. “They try it neat and think ‘Oh, it’s not me.’ But if you want to gain complete control over Scotch’s flavor, dilute it with a bit of ice cold water. Not only does it make it easier to drink, but it new awakens flavor—it’s amazing.”

“It’s important to remember that what we provide in the bottle is a concentrate,” says Bill Bergius, Brand Heritage Director for Allied Domecq's Scotch Malts Portfolio. An avid whisky drinker for 30 years, Bergius still adds up to 80% water when he feels its necessary.

For those who loathe Scotch’s nose, Driver suggests serving it either on the rocks or ice-cold to muffle its scent. One of his favorite vices: A dram of frozen Dalwhinnie with a slice of deeply chocolate cake. I’ll attest: It’s delicious.

“Scotch is a flavor that you really need to spend time getting used to—like anchovies or caviar,” he explains. “If you don’t like it straight away, it doesn’t mean it’s not right for you. Try it again in a month—you may surprise yourself.”

Bergius was right. And I was secretly relieved. I certainly didn’t want to be known ‘round the glen as the American Whisky Wimp. And while Day One may have seen me with a Scotch/water ratio of 20/80, by Day Ten I was swigging back 80/20 with the rest of the MacLeods.

The roots of Scotch whisky have run firm and deep throughout Scotland for more than a millennia. Likely making its debut around 500 A.D. (by “a group of alcoholics known as Irish monks,” according to Paterson,) whisky was an instant hit. The Scots dubbed it uisge beathe in Gaelic, meaning water of life, and the moniker couldn’t have been more accurate.

To the Scots, the spirit’s power seemed almost supernatural. Thought to possess medicinal qualities, it was used to treat everything from smallpox to sword wounds. It also had the uncanny ability to appease a colicky baby, who learned early on that it was the ultimate soothe-all. Scotch pacified kings. Scotch solidified business deals. Scotch strengthened friendships and banished the notorious Scottish chill. Elizabeth Grant may have said it best in her 1898 Memoirs of a Highland Lady, which documented her time spent at Glenlivet Distillery: “That dram was the Highland prayer, it began, accompanied, and ended all things.”

Buried like a precious truffle within the Scottish Highlands, the secluded town of Glenlivet was considered Ground Zero for the whisky smuggling trade during the 18th century. The newly-united parliament had just imposed its first tax on Scotch, and the whisky distillers saw no reason to pay the government for their native drink. Of the 14,000 illicit distilleries that cropped up across Scotland, more than 200 settled within the small glen alone. Ironically, the very man who had imposed the Scotch tax, King George IV (of “Georgie Porgie” nursery rhyme fame), chose Glenlivet’s illicit whisky as his favorite. According to Grant, “The King drank nothing else.”

Unfortunately, many Glenlivet distillers fought to their death before new legislation in 1823 made Scotch whisky a viable source of revenue for both the government and the distillers. The Glenlivet Distillery was the first to “go legal” and is currently the best-selling single malt whisky in the United States.

“Scotch whisky has always been the blood of Scotland,” says Jim McEwan, a 40-year veteran of the industry. On the petite Isle of Islay, where McEwan acts as Bruichladdich Distillery’s Production Director, Scotch production is an integral part of the economy. “If a distillery closes, the heart of the community stops beating,” he says. “We rely on the industry for our livelihood.”

“It’s inextricably linked to our environment, culture, and people. It’s a great source of pride that a spirit made from simple raw materials—in a country of less than five million people—has become such a global icon.”

But Scotch whisky’s staying power would not be possible if it weren’t for SWI’s ceaseless devotion to its native spirit. At age 27, Ewan Gunn, Brand Ambassador for Dewar’s Scotch Whisky, has already spent six years in the industry and doesn’t plan on abandoning it anytime soon.

“Once a person starts working in the Scotch whisky industry, they rarely leave,” says Gunn. “It’s like a large family. Different distilleries trade whisky on an almost daily basis, they share bottling facilities, and even help each other out if there’s a crisis—in how many other industries would that take place?” McEwan agrees.

“We all have great respect for each other—no one is ever badmouthed,” he says. “I’m so grateful to be involved in this business.”

Fortunate for McEwan, Gunn, and the nearly 41,000 other Scots who depend on whisky production for employment, the industry won’t be inhaling its last breath anytime soon. According to Williamson, “Scotch whisky is one of the UK’s top five export earners, with annual profits well over $3 billion.”

But such success does not come without imitation, however, and the Scotch whisky industry is forever embroiled in a fight to preserve the quality and integrity of its product.

“Traders have been known to exploit Scotch's reputation,” says Williamson. “They might misuse the term Scotch whisky on a product that is neither Scotch nor whisky, or use an indirect indication on the label—perhaps a tartan design or a figure in a kilt—to misleadingly suggest Scottish origin. It’s our top priority to provide worldwide legal protection for Scotch.”

Regardless of how many people try to steal the identity of Scotch whisky, however, they will never rob the Scots of their pride, or the permanent warmth that 1500 years of Scotch drinking has instilled on their character.

“When you look into a glass of Scotch, look for the heart and soul of the people who made the whisky,” says McEwan. “You’ll see our integrity, honesty, and history. You’ll see our passion.”